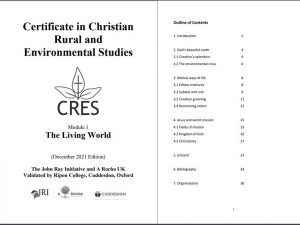 Module 1: The Living World is our first compulsory module that was first written by the late Dena Burne and Dr. John McKeown back in the early 2000s. So it has been taken by generations of CRES students, and it has always been very popular. As most of the module concerns Biblical Studies it does not date that much. But although we had done a few minor updates before, by now it was in need of a much bigger update, particularly concerning the references and resources used. So Dr. Martin Hodson took on the updating task and it is done! Since May 2018 we have now re-written or updated eight of our twelve modules, and there are four more to go. All entirely done by volunteers!!